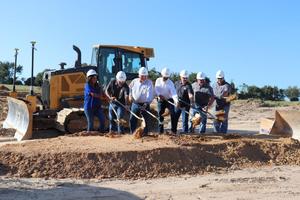 Lisa Tang Special to the Herald-Press

EISD’s school board recently approved funding and accepted bids from the architectural and engineering firm Goodwin Lasiter Strong of Lufkin and construction company Berry & Clay of Rusk. Both firms have previously designed and constructed public school buildings in East Texas. The timeline for completing both buildings is March of 2022.

“This program connects kids to projects they care about being engaged with,” Smith said. “I believe when kids are connected to programs they care about that encourages them to perform at the highest levels academically.”

Smith said EISD has been building its fund balance since 2018 to fund the project.

“We are using fund balance for the project,” Smith said. “We are a fiscally sound district as demonstrated by our ability to add an estimated average of $781,860 to the fund balance each year since 2018.”

“Thank you to the community and the school board and the administration,” McInnis said.