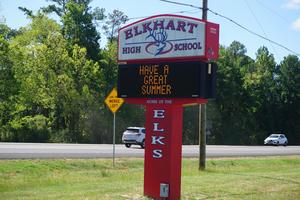 ELKHART  – With the new school year just a couple of weeks away, Elkhart Independent School District is getting ready for teachers, students and football fans.

When Elkhart ISD Superintendent Dr. Lamont Smith learned of the state of the bleachers in the stadium this spring, he called for an inspection and moved graduation to an alternate site. In the meantime, Smith learned the bleacher situation was much worse than suspected. The bleachers were almost 70 years old, and Dr. Smith asked staff to do whatever it would take to make the bleachers safe for students and fans.

“We put a lot of time into making sure that the bleachers are safe,” Smith commented. “We worked with Design Build Services to get it done and they worked on it from May all the way up until last week.”

The bleachers in the stadium have been completely rebuilt now, with inspections from a structural engineer along the way to ensure the work was done correctly.

“We feel comfortable with the bleachers in the stadium being safe for kids, and for the community members who come out and support our Elkhart Elks, band students and cheerleaders.” Smith noted. “We realize that football games are a time for the community to come together and there’s a sense of unity when we are out there supporting our kids.”

Along with other school districts in the area, Elkhart ISD was working on security before the tragedy in Uvalde. Smith said security is always a priority, even in a small town.

“We’re nestled in a great community where people love each other, where we all care about each other,” Smith explained. “We have already communicated to staff to make sure doors are always locked, even now in summer, to get staff in the right mindset before classes begin.”

Elkhart will also have the Guardian Plan on the campuses. The Guardian Plan was passed by the Texas legislature in 2013 and allows for hand picked educators/employees the ability to defend themselves and students in the event of an active threat to the school.

Smith has emphasized that the Uvalde tragedy was eye opening and school security is most important. The district is continuing internal audits as well in order to improve readiness.

Smith is in his fifth year as superintendent, but his history in this area goes back much further. Born in Athens and raised in Cayuga, Smith said it is good to be home.

“To be able to come back here means a lot,” Smith noted. “It’s wonderful to be back in this area.”

Superintendent Smith was planning a bond issue before COVID to help renovate the middle school and improve security, but the economic impact on area residents caused the district to shelve those plans. Smith thinks the time may be right to put the bond issue before the community.

“We started the investigation again about going out for a bond to address those pieces,” Smith said. “The last day to call a bond to address security to make a safer environment for our children and staff is Aug. 22. We plan to make an announcement about the bond and we can make a total renovation of our middle school.”

The Elkhart campuses are still quiet as children enjoy the last days of this year’s hot summer. No bells ring, no feet run through the halls, there is no one on the sports fields.

Inside the administration building however, the staff work to put the final pieces in place before school begins. Although sports and band practices begin before then, the first official day of classes will be Aug. 11.

Smith doesn’t believe a school’s “flashy” programs are always the most important. He contends it’s the every day work with staff and students that will make the difference over time.

“We care. We love kids,” Smith said. “That means we are going to educate our kids to the highest level. When they don’t have goals, dreams, aspirations; we are going to dream for them. We are going to treat children as if they are our own. That’s what we believe in.”

Greg Ritchie can be reached at [email protected]