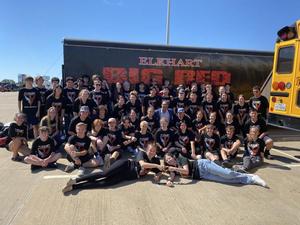 The Elkhart Elks high school band placed fourth out of 25 competing bands at the UIL Area D Marching Contest at Rocket Field in Robinson. The last time Elkhart advanced to the finals at a UIL Area Contest was in 2003. Though this is not a state marching year for 3A, Elkhart’s fourth-place performance would have earned them their first state qualification since 2001.

The Elkhart High School Big Red Band placed fourth out of 25 competing bands at the University Interscholastic League’s Area D Marching Contest at Rocket Field in Robinson this past weekend.

Twenty-five bands performed their program in the preliminary round to earn one of the Top-10 scores overall and advance forward to perform once more for their final rankings. Elkhart placed seventh in the prelims – securing a spot on the grand stage.

“It was a little bit of a shock, really, because our prelims performance happened to be the worst performance of our competitive year,” said Elkhart Band Director Wes Cannaday. “The main contributor to that poor performance was the weather and the 20 plus mile per hour winds that we were trying to play into. After that performance, I just didn't have high hopes for the finals. However, every band had to deal with that same weather, so I guess our show was good enough to be able to survive a bad run-through.

“The kids didn't seem nervous for the finals, but they did have a little extra fire to them. I think they, too, were disappointed in their Prelims performance and wanted to make up for that in the Finals, which they did. Their finals performance was their best performance of the year.”

The Big Red Band improved on its preliminary performance and moved up for a final area ranking of fourth overall. The performance was historical for the Big Red Band as the last time Elkhart qualified for the Area Marching Contest was 2019.

“It's a great feeling to be a part of what this band has been able to accomplish this year,” Cannaday said. “They've worked hard over the past couple of years to get to this point. As for the history of the band, I was the assistant band director right here in Elkhart the last time we advanced to the finals at the Area contest as well as the last time the band advanced to the State Marching Contest.”

The last time Elkhart advanced to the finals at an UIL Area Contest was 2003. Though this is not a state marching year for 3A, Elkhart’s fourth-place performance would have earned them their first State qualification since 2001.

The Big Red Band has enjoyed a successful fall season thus far, beginning with their performance at the Madisonville Showcase where they earned first place in their group, along with the group’s best percussion, best visuals and best music.

At the AT&T Stadium Classic in Arlington Elkhart placed first in class during preliminary competition, while also winning the best music, best visual and best overall effect in their group. They advanced to the final competition where they earned eighth overall.

It was their highest finals placement in any United States Bands contest in school history.

“This program has really come alive in the last four-to-five years and this is just another milestone in the measurement of our growth as a competitive program,” Cannady said. “Not only qualifying for Area, or earning a spot in the finals, but also moving up in the finals from seventh to fourth overall was such a rush. This band is very good. The kids didn't really know how good they were, so it was such a joy to see their reaction when they learned that they were one of the elite 3A Bands in our Area.”